skip to main | skip to sidebar

A strange thing happened to me the other day, well, sadly, it is something that really isn't all that strange....
I had stopped to get gas for my car. As I stood and waited for the pump to fill my car, I noticed that another gentleman who was filling his car on the other side of the pump I was on began to stroll around the area where we were. His strolling eventually took him over to where the air and vacuum machines were. Needing air in my tires, I hoped he would soon return to his car. Alas, this was not the case.
As I began t take the caps off of the valve stems of my tires, the man approached me and made a comment about having to pay for the air for my tires. (It was .75 cents). I smiled and said that I was in a hurry and did not want to run into the store to be able to get the air for free. The man, a total stranger, then began a tirade of explicatives and racial epitaphs against the people who ran the store.
Now, you may think, and rightly so, how terrible it was for someone to just come out and say things like that to another person, especially a stranger. However, I feel that the greater sadness here is that this person saw nothing wrong with how he was speaking. He saw nothing wrong with judging a person based on their race. He saw nothing wrong with using words that would make most of us cringe. Now, I am not naive, no will I sit here and type that I have never sworn of judged another person. I do not want God to strike me down for lying!!! But....I can say that when I have done those things I have known they were wrong and usually done out of anger or frustration. The very sad point here is that this man felt and spoke like this as if were normal.
I think maybe one of the harder things that is asked of us as Christians is to recognize when we sin. In a world that has certainly lost its moral compass, there doesn't ever seem to be much that is "wrong" or "off limits". Therefore it can be hard some times to know when our behavior has moved away from the path of salvation. This can most especially be true with our children.
So, how do we fix this? The simple answer is to practice a spiritual life, that is, a life of prayer, fasting and worship. If all we see and hear is the sinfulness of this world, then this is what we will imitate. If however, we try to balance or overcome the sinfulness of this world with words of prayer, sounds of Liturgy and the discipline of fasting, then we can distinguish between what is right or wrong. We may not always make the right choice, but when we make the wrong one, we will, without a doubt, know it.
Posted by Very Rev. Fr. David Cochran at 7:51 AM No comments: Links to this post

Well, the winter Olympics came to a spectacular conclusion this past weekend. The pageantry of the opening and closing ceremonies always amazes me. What also amazes me is the effort put in by the athletes. It is hard to imagine spending four years of your life training for shot at the Olympic games. Not to mention that most events are over in a matter of seconds or minutes.
I would imagine it is safe to says the all of the athletes, medalists and non-medalists alike, find themselves changed by the event and by the training. Most, if not all, of those athletes are different people by the time the games come to a close.
I think that in many ways, Great Lent is much the same. Lent is almost like a training ground. It is the training to make us ready to celebrate Pascha, that moment of the Resurrection of Christ. The same way that Olympic athletes train four years for that spit second of competition, we train 40 days for that split moment when we see the church clothed in white, the bells ringing and the refrains of "Christ is Risen" filling the Church.
The challenge of all of this is that we too must find ourselves changed by this "olympic" event. We cannot allow ourselves to go through Lent, the additional services, the added prayer life, the adult education opportunities and not be changed. We cannot experience the beauty and majesty of the Resurrection of Christ and not be changed. If we do, then we have not truly put in any effort into the Lenten season.
Certainly, we can go through Great Lent as we go through the rest of the year, doing whatever it is we want to do. Or, we can make a truly Olympic effort in our Lenten journey and experience what the true joy and meaning of Pascha really is. God give each of us the strength to shoot for the gold medal of prayer, fasting and worship as we journey towards the Resurrection of Christ.
Posted by Very Rev. Fr. David Cochran at 4:20 PM No comments: Links to this post 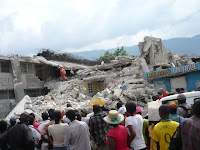 We all remember the devastating earthquake that rocked the nation of Haiti a few weeks ago. And while the appeals for help have faded and the news stations have moved on to to what they consider more important or relevant information, we must remember that our help, financial, physical and spiritual, is still needed. And not only in Haiti, but in other areas of the world.
One of the hardest things sometimes to do is to put a face on a need. Certainly the pictures of the devastation in Haiti were effective in helping us to realize how terrible the earthquake must have been. But I think the above pictures tells an even more compelling story, because it tells the story of humanity.
The contrast of the pictures above of the destruction of the earthquake against an Orthodox community receiving the Body and Blood of Christ can be seen as a story of our Christian life. Original sin destroyed our relationship with God. It broke down that bond with God that we were created to have. It was a devastating event for humanity.
But, with the advent of Jesus Christ, His death and Resurrection, that relationship, that bond is offered to us once again, most notably in the reception of the Body and Blood of Christ. Just as the overwhelming donations and the thousands of volunteer hours will rebuild this poor nation, so too, our spiritual life rebuilds our relationship with God.
There is no better time to concentrate our efforts on this rebuilding that during this Lenten season. Let us take advantage of the things that are offered to us: Confession, Communion, Lenten Services, Additional Prayers, Alms-giving, to reestablish that bond that we were meant to have with God.
We here at St. John's made a sizable donation of funds and necessities to help with Haiti. If you were unable to contribute as of yet, do so now. And all of us, as part of our Lenten effort, should continue to remember the people of Haiti, and most notably, the Orthodox Mission churches there, in our prayers. Let us pray for them every day of Great Lent that God will give them the strength and courage to completely recover from this terrible event.
For more information on the Orthodox Church in Haiti, please click here or here.
Posted by Very Rev. Fr. David Cochran at 8:56 AM No comments: Links to this post